On the westernmost side of the Santa Maria Valley AVA, Solomon Hills Vineyard has been a coveted source of exquisite Central Coast Chardonnay & Pinot Noir since the 1990’s. 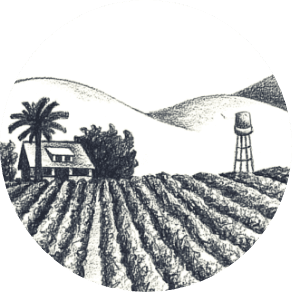 Solomon Hills Vineyard, named after the famed Santa Maria Valley bandit, Salomon Pico, has been a Miller Family vineyard since the late 1990’s, when the Miller Brothers first laid eyes on the site and foresaw the immense potential. Located just miles from the Pacific coast, this site sits at the westernmost edge of the Santa Maria Valley, earning it the distinction of the coolest vineyard in the entire appellation.
The constant maritime influence affords the vines more growing time, resulting in wine with precise acidity, bright fruit flavors and inherent elegance.

With a focus on Chardonnay and Pinot Noir, the winemakers of Solomon Hills have consistently crafted wine that is known for its vibrant, youthful flavor profile that is both exhilarating and profound.
With each passing year, the Chardonnay and Pinot Noir from the Solomon Hills Estate continue to draw critical acclaim, offering one of the finest expressions of California’s Central Coast, with distinct characteristics and nuances that Solomon Hills has now become known for.